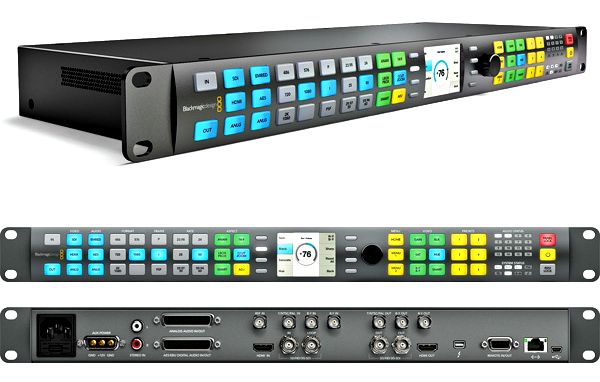 The Blackmagic-Design Teranex 2D Processor is an advanced-quality standards converter as well as video format converter and capture and playback device all-in-one. As a standards converter, it can convert from most any television format to any other television format in the highest quality. Conversions are indistinguishable from the original master. And as for capture/playback functionality, the Teranex can simultaneously convert formats and -- via Thunderbolt -- capture files into a computer for editing.

What makes Teranex so good is an advanced SIMD technology--developed and patented by Teranex--that allows instant calculations on thousands of pixels simultaneously in X, Y positions and between video frames. Processing is applied within the frame and between frames all at the same time, delivering better de-interlacing, inter-frame interpolation and noise reduction.

Standards conversions can actually also be employed for reasons other than the general need to convert. Conversions can be performed simply to protect equipment such as decks, switchers, transmitters and encoders from standards they don't support. And as far as non-general uses go, the Teranex can additionally be used to synchronize and convert video feeds.

A bunch of software comes included. Two of them are Media Express and UltraScope. UltraScope lets you measure your video signal levels with a Thunderbolt-connected computer, displaying 6 simultaneous live scopes on a single screen. The addition of these two applications to your NLE give you a complete editing toolset to complement an all-in-one conversion/capture device.

Need Help Getting Your Project Started?